By the Way…What’s your NAME?!

“Hello, my name is Ploni Almoni, I’m an Escapaholic, and I’ve been sober for ??? time“ (12 Step Meeting Format)

Today, we are learning, how Parsha Vayishlach speaks to those who seek Recovery. 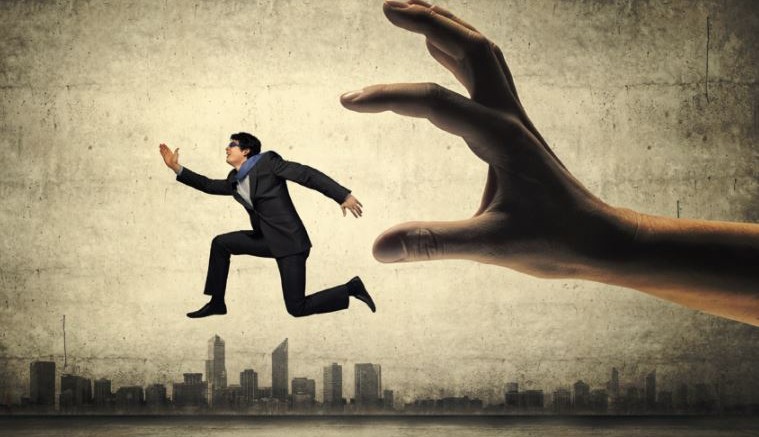 As we continue the Story of our Patriarchs and Matriarchs, we learn in this Parsha about one of the most perplexing episodes of the entire Torah.  As we all know, we learn in Vayishlach, it’s been 20 years since Yakov ran away from Esav after seemingly stealing his Blessing from their father, Yitzhok.  And in this Parsha, after marrying his four wives – having 11 sons and living in the home of Laban, his deceptive father-in-law; Yakov also runs away with his large family, flocks and all his belongings – and crosses the Yabbok River into Eretz Canaan. Yakov learns that Esav is coming to confront him and prepares for war, prepares gifts and prays to G-d.  But something mysterious happens.  Yakov makes a decision to go back across the River – most commentators say to retrieve a small earthware pitcher.  But the Rashbam tells us something very few talk about.  He says that Yakov was actually RUNNING AWAY – determined to ESCAPE from the FEAR, the PRESSURE, the DISTRESS he felt by this upcoming encounter with Esav.  (Just imagine how you might feel after stealing three valuable items from Esav – his birthright, his blessings…plus his wife Leah – whom he was was supposed to marry!)

“And Yakov was LEFT ALONE!” 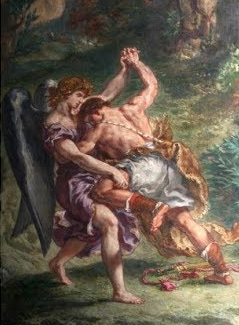 The Rashbam continues to tell us that G-d sent a “man” to keep Yakov from running away.  And he “wrestled with him until the break of dawn.”   WHO IS THIS “MAN?”  Rashi explains that this “man” was the Guardian Angel of Esav.  Just as Esav epitomizes evil, so too his angel is the prime spiritual force of evil – Satan himself.  Bava Basra 16a explains that Satan descends and seduces man to sin, then incites G-d to punish him to take his life.  Thus the battle between Yakov and the “man” was the eternal struggle between good and evil, between man’s capacity to perfect himself and Satan’s determination to destroy him spiritually.

Eventual, Yakov prevails even after being struck in the hip socket.  This was not just any wrestling match for Yakov.  G-d did not doubt that Yakov would win this battle.  Just like ALL of the TESTS that our forefathers faced, it wasn’t for the enjoyment of G-d – it was designed precisely by G-d for the BENEFIT of our forefathers – so they would recognize their own POTENTIAL and ability to overcome TESTS!

After the Man-Angel was defeated by Yakov – in another seemingly senseless act, the Man-Angel asks “What is your NAME?!”  After replying “Yakov”, the Man-Angel says “no longer will it be said that your name is Yakov, but YISROEL, for you have striven with the Divine and with man and have overcome!”

Rashi teaches us that the Man-Angel did not have the authority to rename Yakov, nor was his name changed immediately.  It was G-d Himself that renamed Yakov 62 versus later on 35:10.

After Yakov experienced the fight with the man/angel, the tense meeting with Esav, the abduction of Dinah in Shechem, the unapproved deception by Shimon and Levi to destroy the city and the death of Rifka – did he encounter G-d.  After enduring all these tests – “HE (G-d) blessed Yakov, saying Your NAME is Yakov.  Your NAME shall not always be called Yakov, but ISRAEL shall be your NAME!”  Thus, Yakov now has TWO NAMES.

Incidentally, Yakov/Yisroel wasn’t the only one experiencing a NAME change – so was G-d!  In verse 11, “And G-d said to him, I am El Shaddai”…and blessed him and all of the nations and kings that will come from Yakov!  Rashi treats us to a beautifully insightful explanation saying that the name “EL” signifies G-d’s powerful attribute of mercy.  And “Shaddai” comes from the word sufficiency or precision.  Thus, “The One Who is Precise” determines precisely how much of a blessing one requires or deserves and conversely, how much suffering one can bear without breaking under the strain!

OK!  There is so much we can learn from all we’ve reviewed.

Firstly, it is not insignificant that we see the sharp and frequent focus on NAMES!  From the first days of Creation, the various elements were identified by their NAMES.  As soon as Adam was created (and named), the Angels questioned G-d if Adam had enough wisdom to be the first man.  G-d responded by having Adam GIVE NAMES to every single creature on earth.  How?  Because Adam was gifted by G-d to determine a creature’s name by looking into its ESSENCE.  I don’t have to remind the reader that even the name of G-d that we use most often is “HaSHEM” – the NAME!

In all these Chapter of Genesis/Bereishis, we witness the giving of the many NAMES to all the characters – from Noach (comfort) thru Avram’s and Sarai’s name change to the names of Yitchak and Yakov/Yisroel, Esav – their wives and the 12 tribes – all of them reflecting their TRUE ESSENCE!!

Finally, the most powerful lesson is the one we learn about Yakov/Yisroel that comes from the Rashbam, who said that he was trying to RUN AWAY – ESCAPE from all his fears and pressures.  But rather than allow Yakov to totally flee, G-d has the angel of Esav hold him back – with Yakov’s ultimate victory over Satan himself!

Rabbi YY Jacobson gives us a powerful insight which is truly a message for the addict!  We learn that Yakov wasn’t the only Torah hero that RAN AWAY.  In addition, we see how Moshe argued with G-d to avoid leading the Jews out of Egypt – he said “Who am I?”  Next we see how Yonah became the epitome of Escapaholism by fleeing on a boat and even risking his life, jumping into the ocean.  He was afraid that He wasn’t Worthy to deliver the message to the enemy of the Jews – in Ninevah.

In all these cases – Yakov, Moshe and Yonah felt Inept, Incapable, Low Self-Esteem and Low Self-Confidence and did not want to fulfill their G-d given Mission in Life!  Just like all of us who are addicts!!  And we too, must eventually face our demons and finally recognize that we must:

DEVELOP THE COURAGE TO SAY “YES, I HAVE FEAR, I DON’T KNOW HOW I’LL EVER RECOVERY – BUT I BELIEVE IN MYSELF AND MY HIGHER POWER AND THAT I CAN OVERCOME ALL THE CHALLENGES THAT G-D BRINGS TO ME!!”

And only then can we attend a Twelve Step Meeting and say:

“Hello, MY NEW NAME is Ploni Almoni, I’m a GRATEFULLY RECOVERING Escapaholic, and I’ve been sober for ??? years!”

“To Thine own Self Be True” 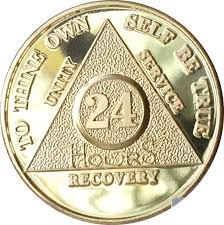 Let us all use this message that we inherited from our Ancestors – to reveal the Spiritual DNA we inherited from Yakov/Yisroel to face our fears, and overcome our challenges – mercifully given to us by The ONE who is PRECISE!  And then we can merit to be NAMED “B’nai Yisroel!!”